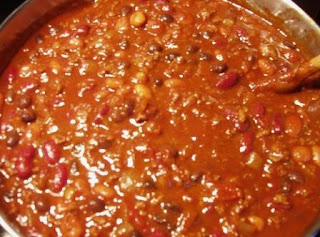 I *heart* it so much, I'm going to share a recipe with you.

It's November and in Wisconsin that means 40 to 50 degrees Fahrenheit during the day and below freezing at night. By February, we'll be lucky to have seen the sun for more than three hours in a week and Ice Road Truckers will be starting their runs across Lake Mendota's three feet of ice. Wisconsinites take this all in stride; we are a hardy bunch, and fourteen below zero weather doesn't stop us from carrying on about our day. One of the ways we in the north get through our winters is consuming a fair amount of soups, stews, and anything we can cook in a slow-cooker for hours on end. Both East and West coasters love to make fun of us chubby, pasty-white Midwesterners. But unlike coasties, we can survive arctic temperatures with minimal discomfort and can maintain a relative amount of sanity after five months of frigid weather. (Though I will admit to the fact that this is made easier by fostering a certain level of lunacy to begin with.)

One of the ways I survive winter is making chili in my slow-cooker. As I write this, my first batch of chili of the season is simmering in my kitchen and it will be doing so for the next ten hours, (for a total of twelve hours.) I was given the recipe almost twenty years ago by a guy who lived on the same floor as I did when I was stationed at Castle Air Force Base in California. For the life of me, I can't remember his name, only that his nickname was "Tex". He was from somewhere just outside of Houston and one day, after I made some chili in the first slow-cooker I ever owned, (my mom's old slow-cooker from the early 80's,) he decided that it was his civic duty as a Texan teach a "yankee" how to make chili properly. I have used this recipe, tweaking it every now and again, ever since.

It is now MY civic duty to share this recipe with you. Feel free to tweak as you wish:

In your slow-cooker, mix in tomatoes, puree, beans, chili powder, and cumin and set the temperature to Low. Cook two or three strips of bacon in a frying pan to draw out grease. Eat bacon when done. (Mmmmm...bacon.) Saute onions, peppers, and garlic in bacon grease on medium heat until onions are translucent. Pour contents of pan into you slow-cooker and mix.  Lightly coat stew meat in flour. Pour oil into pan and cook meat on medium-high heat until lightly browned. Pour contents of pan into slow-cooker and mix. Cook chili on low heat for a minimum of 8 hours, stirring every 2 hours or so.  I cook mine for at least 10 hours. Feel free to thin out chili with water or beef stock if it becomes too thick during the cooking process.  After cooking is finished, you may eat right away, but chili, much like good stews and soups, is better after it has cooled for at least 12 hours, allowing the flavors to "marry" further. If you choose to do so, simply reheat, serve with your favorite toppings and enjoy!

Who is this guy?!

Jay Adkins
Madison, Wisconsin, United States
Jay is a man with a computer, telling you what he thinks, what he sees, and occasionally, what he feels. Jay likes food, art, politics, video games, and talking about himself in the third person.